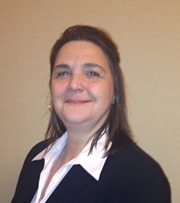 Brenda Schultz, BAS, SCT (ASCP)
Brenda initially was a microbiology major, but under advisement of her college counselor, registered for the cytotechnology program in Madison, WI which was said to “offer a more promising future and career”.  After graduating from the program, she went on to receive her bachelor’s degree in applied studies at UM-Minneapolis.

Brenda has always enjoyed networking within the field of cytology. She quickly became involved within the Minnesota and Wisconsin Societies of Cytology, holding various positions in both societies, including those of President.  She is a member of ASCP and a voting member of ASC. She credits colleagues for introducing her to the ASCT, where she has been active since joining in 1984.  Brenda has volunteered and participated in many areas within the ASCT, to include holding the leadership positions of President, Editor-in-Chief of the “Voice” newsletter and on numerous committees as chairperson.  She has presented lectures, workshops and webinars on behalf of ASCT and additionally for ASCP and TJC.

Brenda has served as a consultant for ASCT Services since 1991.  She was hired as a survey team leader in 2000 and then as the Technical Director, a position which she currently holds and thoroughly enjoys.  She feels privileged to have met and worked with so many professionals in the laboratory sciences.